Unlike my other blogs this is not MS related – I just think it’s nice. After all, it is Christmas 😊

Myself & Michelle were at a wedding a couple of weeks back. My friends Amy & Richie were getting married and we had a great day 😊 Amy’s sister, Laura, works on the same team as me in the job. She introduced me to her partner, Eavan, who works just around the corner from us in Lolly & Cooks. Now I can’t say I remember this too well (obviously I’d had a few drinks at this stage) but I recall telling Eavan that a visit to Lolly & Cooks on a Friday was on my to-do list. Every Friday in winter they have coddle on the menu. Just talking about coddle fills me full of nostalgia and sentimentality.

When I was a young kid my Dad was away with the army serving in Baghdad. My Mam would bring us over to my dad’s folks every Saturday while he was away. My Nanny Byrne was very regimental in the way she prepared dinners. Saturday was coddle day. So every Saturday, while Dad was abroad, Mam, Donna and me would have coddle with the Nanny and Granddad. And we loved it! Dad came home on my 6th birthday after 6 months away and we even made the newspaper. 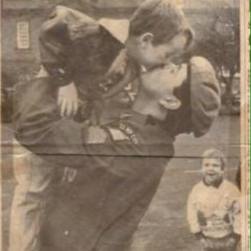 He started bringing us to Nanny’s on a Friday after he got back. Friday was chips, fried egg & smoked cod and it stayed that way for years. Even now when I smell smoked cod it brings me back to the Glin Road and my Nanny’s kitchen of a Friday. Still though, we made sure our Mam learned how to make coddle just like Nanny’s. And she did. She still makes it the same to this very day; boiled sausages, rashers, onions, tomatoes, potatoes, oxtail cube to turn it brown. I think that’s the gist of it. I really need to learn how to make it for myself. Needless to say it’s de-lish. Haven’t had it in a good while though. Anyway I hope that explains the reasoning behind the sentimentality.

So the following week in work myself and Laura conversed about the wedding the previous week as you do. It was the Friday before Christmas so Kris Kindle and a Christmas Jumper competition were the main talking points in the office. A few of us put ourselves forward for the Christmas Jumper competition – the top 3 winning prizes. No one from our department won anything. It showed a total lack of appreciation for my jumper which is a homage to the film It’s A Wonderful Life. Here’s me with my dad last Christmas rocking the same jumper: 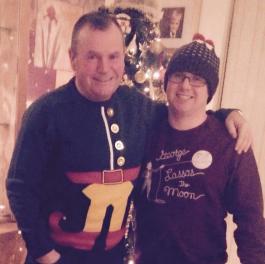 We made our way back to our desks knowing that Kris Kindle was next on  the workday Christmas list. I knew Laura wasn’t partaking in Kris Kindle so she excused herself while gifts were exchanged. I don’t know who got me my presents but emoji socks and Christmas boxers was a very good shout. The person must be reading this because it was addressed #Byrne #Blogs #Twitter with a picture of Santa giving two thumbs up 👍🏻👍🏻 They know me so well. Kris Kindle is always a bit of craic and we were having a laugh going round seeing what everyone got. One of the lads had a bell for some reason and when he rang it I couldn’t help but throw a quote out from It’s a Wonderful Life: “Every time a bell rings, an angel gets his wings”. Those who got it laughed but I think most just thought I was an eejitt. Anyway I was laughing to myself walking back to my desk. At the same time Laura had come back with a cup from Lolly & Cooks. While we were doing Kris Kindle, Eavan had dropped coddle in for her to give to me. I was so happy. I felt like a real life George Bailey. “Keifib lassos a coddle”. I milled it straight away. Different to my Mam’s and Nanny’s but still really nice and the sentiment remained the same.

After telling her that story my Mam ended up making coddle on Monday for Donna while she’s home from Canada for the month with my little nephew Noah. Unfortunately I wasn’t around to have any but I’m not living too far away so hopefully 2016 will see me having the odd coddle in my folks house (hint hint mam). Although it’s ingredients probably contradict the diet I’m trying to stick to – everything in moderation 😊

It’s only a little story but it just reminds me of the knock on effect our actions have; no matter how big or small they are.  To quote Clarence from It’s A Wonderful Life:

Strange, isn’t it? Each man’s life touches so many other lives. When he isn’t around he leaves an awful hole, doesn’t he?

And here’s a link to a recipe for coddle.