I was diagnosed with MS when I was 31. I had only recently got engaged and becoming a father seemed like it would be a natural progression for me. Throw MS into the mix, however, and there’s a lot more to consider. For example, fertility became a major factor when deciding which medication to take. I was given information packs regarding each course of medication that I was considered eligible for. Some affect fertility in both men and women, some affect a woman’s fertility only and other’s don’t affect fertility at all. My condition was stable so I only considered medication that would not affect my fertility. Thankfully less than a year after starting medication we were expecting our first child.

Oliver was born in January 2017 – almost 2 years to the day after my doctor advised me that my MRI results came back indicating it was MS causing the blurred vision, dizziness and fatigue. After a week in the hospital we were allowed to bring him home. The moment I got in the car, ready to drive my wife and our newborn son home to start our new life, was the most life affirming moment I have ever experienced. The journey was well and truly underway. I was expecting the sleepless nights to start immediately. I almost felt guilty that he slept so much initially, particularly when I had heard the struggles so many have with newborns. This allowed me to combat fatigue in my usual manner which I was grateful for.

It took a few weeks to implement the midwife’s advice but once we did we noticed a significant improvement. The first noticeable improvement was in his speech, however, he had still yet to walk. I booked an impromptu day off work and walked with him in his buggy to the promenade in Clontarf. I would go walking there regularly myself when I had to regain my confidence in my own mobility around the time of my diagnosis. Something about the sea air helps me think more clearly. Anyway, I took him out of his buggy on the grass facing the Poolbeg Chimneys across the water, I held his hand as he nervously stood up, I cautiously let go of him and like that he took about 20 steps in a row before happily falling onto his bum. We instantly started to laugh and lay on the grass hugging each other. Even at such an innocent age he knew what a big achievement taking his first steps was. It seemed fitting that my son would take his first steps in a place that his Dad used to walk so often and associates with helping him regain his self-confidence when diagnosed with MS.

When initially diagnosed one of the first thoughts I had was how long until I’m going to need a wheelchair? I now know that relying on walking aids is by no means the end of the world and in many ways really help improve a person’s quality of life. One thing as a parent I’ve really noticed is when pushing the buggy there are so many obstacles to overcome such as access to elevators and cars blocking pathways. Places tend to be avoided if they are not easily accessible whereas a small change in mindset regarding accessibility would make a big difference to so many people.

It’s now one year since Oliver took his first steps. Like any child he still likes to be lifted when it suits him. Yet, the older they get the heavier they get. I struggle lifting him for any prolonged period nowadays as the sensation at the base of my spine becomes too painful to hold him for too long. I can only attribute this to an unsuccessful lumbar puncture I had while being tested for diagnosis. It’s difficult trying to juggle family life at the best of times – you want to prioritise your child’s wellbeing at all costs. Yet, with both parents working full-time, trying to maintain a healthy lifestyle, having to remember to take your medication & Vitamin D supplements, all the while dealing with fatigue and brain fog on a daily basis conscious that if I sway far enough away from the daily routine a potential relapse could be waiting for me, it can be a strain to say the least. 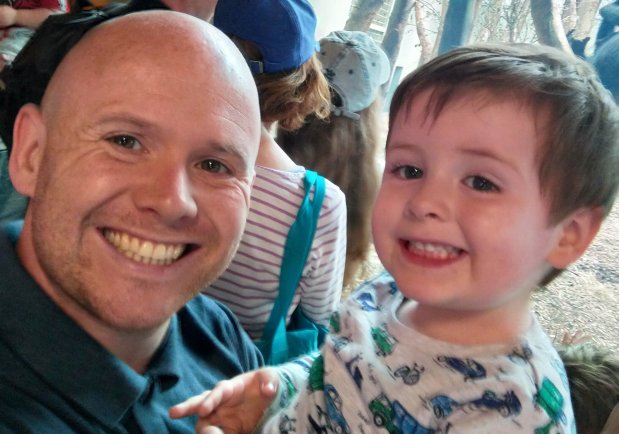 There’s no stopping him from getting up to all sorts these days. Cuts and scrapes happen so often now he believes plasters are the solution to all life’s problems. So when his Daddy is having some well needed rest and he bursts into the bedroom…. “Dada, get up Dada!!” “Sorry son, Daddy isn’t feeling well and needs to rest” “I will get you a plaster”…. I can’t help but smile.